Departing one day after a 4-week dance intensive, I cease to deny the exhaustion that vanquished any initial feelings of great anticipation for a mission trip to Peru.  Upon arrival at the hospital, I was assigned to the ARK machine—a task that required a handful of trials to master.  By the end of the week, I had probably measured the eyes of at least 200 patients.  Though I had embarked on many mission trips including ones to Kenya and Haiti, this particular one felt different due to the repetitive, mundane task of checking patients, rather than one-on-one personal encounters and conversations I’ve made on previous trips.  It was, however, a neat experience to be able to be a part, even if insignificant, of a healing process that could potentially change lives.  I wasn’t the surgeon like my dad, but I learned that I just had to be willing to serve and allow God to use me His way, and not mine.

As the week progressed, I became more comfortable with putting my high school sophomore-level Spanish into use by asking patients questions and saying simple phrases such as “good morning!” or “how old are you?” It was then I realized I was blaming the mundane task of the ARK machine as the hindrance to developing relationships with the Peruvians; Instead, I should have been making an effort to initiate my own conversations with people.  As my dad always says, “how much you put in is how much you will get out.”

Another task I found so fulfilling was treating the post-operation patients.  It was truly an honor to take off the patch and clean around the eye.  As I treated each patient, I prayed that not only would their physical sight be restored, but that the Lord would open the eyes of their precious hearts.  It was amazing to see the pure joy and gratitude that flowed out from the healed.

One patient in particular, taught me a lesson I will never forget.  It was the end of a grueling day, and the doctors decided to postpone 3 surgeries scheduled for the evening to be placed in the morning.  When my mother announced this to the patients, who had been waiting 10+ hours, nobody dared give up their position.  There was, however, one jovial man, who immediately offered to leave.  To me, this beautiful act of selflessness only made me greatly admire this man, who never ceased to wipe a smile off his face.  It truly made me contemplate the complaints I’m used to giving in my privileged country, and this man unknowingly made a lasting impact on my own life.  All in all, I thank the Lord for his omniscient nature, and His good and perfect plan for me, including a humbling trip to Peru. 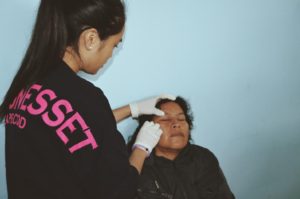 Processed with VSCO with m3 preset

Processed with VSCO with m3 preset